I just loved this book. It gives you lots of insight into tennis in the “old” days and the guy profiled is simply a “character” who I’d love to meet. So if anybody knows how to get hold of him please let me know. 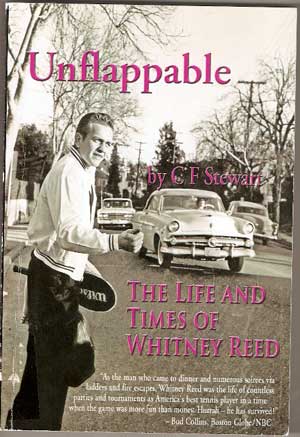 This book made me laugh out loud at least 50 times.

From Chapter 9 – More Shoddy Thoughts
“To be completely fair, the 50’s and 60’s embraced a different set of standards. . . A man was judged by how well he handled liquor, tobacco and fashion. It was cool to drink copious amounts of booze; it was not cool to drink copious amounts of booze and be a bore. It was cool to smoke; it was not cool to dress like a slob. Whitney Reed was always quintessentially cool. In 60 years of competitive tennis has anyone ever accused Whitney of being a bore or a slob.”

From Chapter 10 – Anything Worth Doing is Worth Doing in Excess
“The setting was the 1963 Southhampton Championships. The match was just hours away. Whitney slipped through the quarterfinals and celebrated with a cute little blonde from Manhattan Beach. Celebrated my be an understatement; the last thing Whitney remembered was the little blonde trying to convince him to play mixed doubles in her father’s tennis club championships wearing a disguise. Now he had to drag himself out of bed and play Kozei Kamo who drank nothing more than a glass of warm milk with dinner and was in bed by 9:00 PM.

[hahahaha I love this next line] Whitney looked in the mirror and decided shaving was way too dangerous. . . .He wondered how much fun he had had the previous night, vaguely remembering the blonde, the bottle of Jim Beam, other assorted playmates . . .Whitney made it to the courts safely and on time. [As the story goes] Whitney lost the first two sets. Won the third 7-5 and during the break between the third and fourth sets ran to the bar and ordered five beers. He placed them strategically between his tennis bag and the water cooler. During every crossover he sipped from one of the cups until at the end of the match all the cups were empty. Also empty was Kozei Kamo; Whitney hit lob after lob followed by drop shot after drop shot until Kamo was totally spent. Kamo must have run 400 miles in that two-hour match.”

The book is just full of examples of how Whitney would run his opponents to death. See if you can find this book on Amazon or a used book search. I was laughing out loud many times throughout the entire book