My friend Allan from Connecticut was visiting me yesterday and he loves taking pictures. I was scheduled to practice with a local guy so he tagged along to snap some photos. Of course, with me still being slightly over 300 lbs it’s good he had a wide angle lens hahahaha. Actually he just had an older digital camera and of because of my blazing speed 🙂 there’s a little bit of blur in some of these.

These photos do show that I seem to be doing a fairly good job of one thing . . . hitting the ball in front of me. I really learned the importance of this when I took some lessons from Coach Kyril and then I saw the video on his site by Mauro Marcos that made it even more clear in my mind why hitting the ball in front is really important. The video is titled: “Getting A Great Forehand – And Getting Rid of Tennis Elbow Pain in Less Than 30 Minutes”. You can find this video at http://www.coachkyriltennis.com At about the 4 minute mark of the video Coach Mauro shows that not only is the out front strike point more strong, but that it virtually eliminates tennis elbow pain. 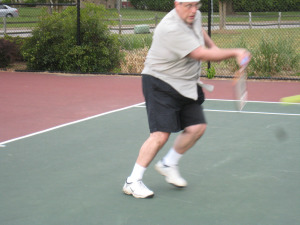 Check out the cocked back wrist and extreme forward strike point. When I started using this technique all my tennis elbow pain disappeared. 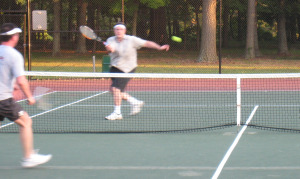 Another coach of mine tells me when I stay out in front on the volley, I play the ball instead of the ball playing me.

And here’s a one handed backhand: 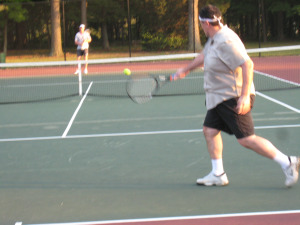 I don't know about two handed backhands, but I do know that if you are using a one handed back hand and the ball gets behind you, you are in trouble.