I just got back from spending several days one-on-one with the legendary tennis coach and researcher Vic Braden in lovely Coto de Caza, California the home of the original Vic Braden Tennis College. 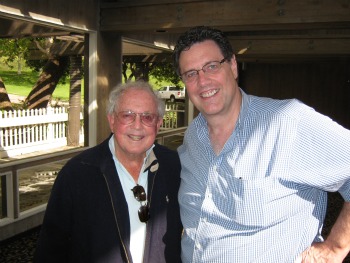 Besides increasing my serve speed by 30 MPH (yes, I know that sounds ridiculous especially since he did it in only 1 hour….more on this in an upcoming post) Vic was telling me story after story about pro tennis from the old days when he turned pro right up to the minute. Vic is still to this day right on the cutting edge of human performance. In fact, Vic was the only one sanctioned to video tape using three hidden cameras at the latest Indian wells tournament (apparently the obvious presence of a camera changes on court performance….that’s why they’re hidden.

Before he took me on one-on-one I sat in on his lecture for a doubles clinic being held that day.

OMG! The research he rattled off in 90 minutes was mindblowing….It really was mindblowing. He was talking about how we make the best decisions when our brain is working in the frontal cortex. It’s our job as tennis players to get our opponents playing in their back brain while we stay in the front brain. He told us many ways on how to do this.

If you want a complete breakdown of what was covered in that session visit Richard Neher’s coverage of the session for the Examiner. 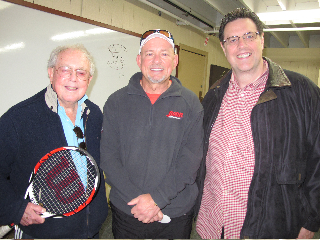 Watch for my exclusive video interview with Vic Braden coming up this week and I can’t wait until you hear his story about Bobby Riggs and an elephant beating Vic and Anita Bryant.