Even though I spend hundreds of dollars on Racquets, strings, balls, shoes and clothing and thousands on ball machines and tennis travel I still come from a frugal family and every time I see a price tag of $2.00 or more on a string dampener I say to myself, (no pun intended), “What a racket!”

As I’ve studied tennis I came across the fact that Andre Agassi used a rubber band as a vibration dampener. My friend coach kyril from http://www.coachkyriltennis.com told me he was so broke when he was coming up through the ranks that he had no choice but to use rubber bands as dampeners. 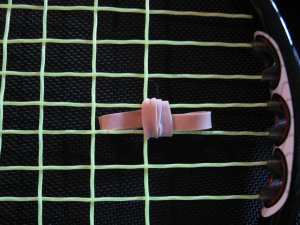 A size 64 rubber band works great as a vibration dampener.

Not only did it make sense moneywise, it’s kind of cool, and the darn thing never falls off or pops out. The only bad part about that is that I’ve seen dozens of fatties use a “supposed” lost string dampener as a way to stall and suck some extra air after a long point . . . .hahaha Busted . . . .. you can’t do that if you use a rubber band on your strings.

While I’m talking about dampeners I may as well tell you about another tip I heard that is “anti” dampeners.

I don’t remember where I learned this, but a guy wanted to be especially intimidating with his big serve. He removed the dampener and found that his racquet made a much louder pop when he hit his serve .  . . especially indoors.

I’m not sure this would intimidate me, but I just thought I’d pass it along.